And These Came in the Mail


Rather, I had these sent to my school since I was on an off-site training.  Bosny Philippines has once again graciously sent me free stuff, this time, my choice of 48 cans of Bosny Paints and a couple of Spray Guns.  A while back, they've also given me a few cans, a couple of the guns, some shirts, and a couple of USB drives.

The package came in in five boxes, three of which are actual Bosny boxes with the paints they come in.  The larger brown box contained the standard-sized cans.  I've also asked them from a new catalog, since the one given to me by a friendly hardware store owner several years back have become very dilapidated from frequent use. 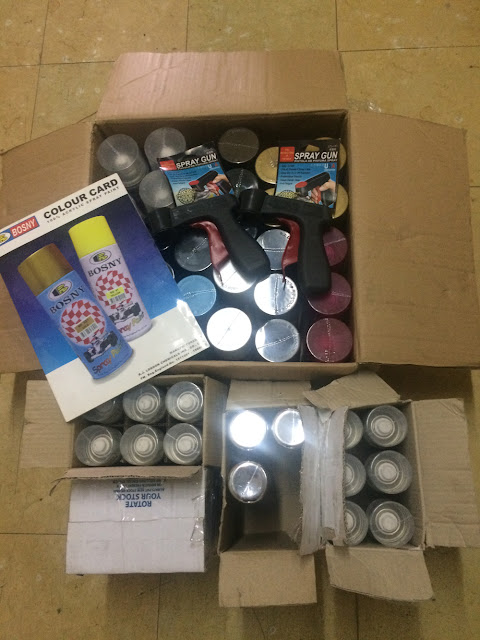 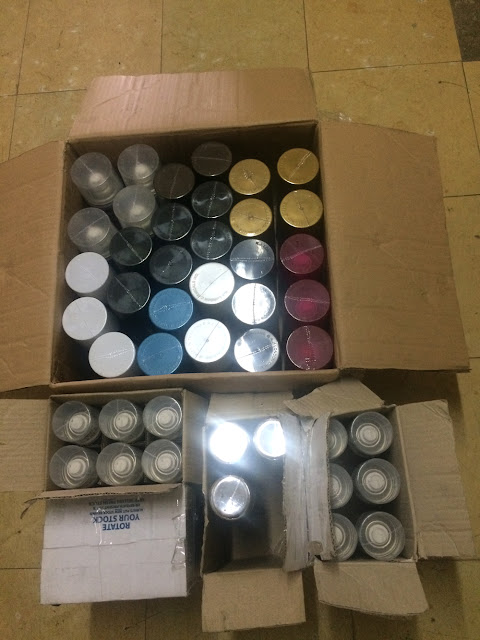 The new catalog has a cleaner layout, which makes it easier to search for the color one is looking for. 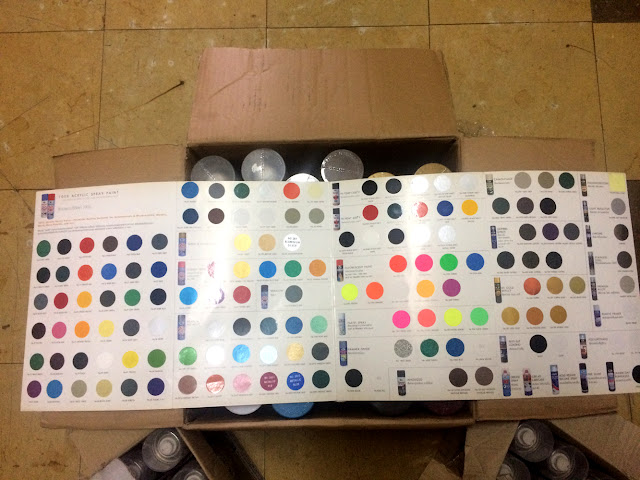 The spray guns can be used to aid in spraying, relieving much of the stress of spraying via nozzle.  I haven't really tried to use the ones given to be a while back, since I'm rather comfortable just using my finger, and have achieved good enough finger control.  I will be raffling these, along with the other two later on. 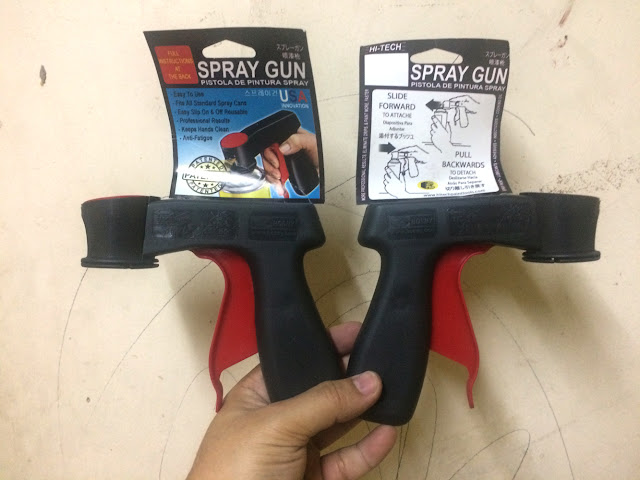 Now, for the nifty stuff.  My usual suspects (L-R): Flat Clear, White Pearl, Flat Black, Flat White, Gold 351, and Hondat Red 67.  I would have gotten other colors, since I did stock up a month or so earlier, but, these colors can run out rather quick, especially with the techniques I use, and of course, experimentation and testing. 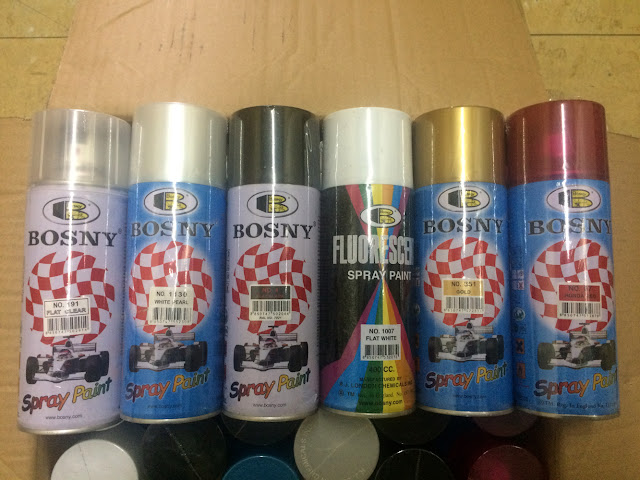 New team members (L-R): Black Tint, Anodized Bronze, Blue Lagoon, Light Reflector, Stainless Steel and Mirror Chrome.  Jan Michael Aldeguer did a nice spoon test of the Mirror Chrome, but, like the regular chrome, it does get tarnished rather quickly and top coating makes it dull.  I'll be doing experiments myself on the Mirror Chrome.

It's worthwhile to note, I got the Light Reflector and the Stainless Steel to see the extent of what the paints can do for Gunpla.  I'm curious as to how the Stainless Steel will actually look on plastic, though it looks like a slightly darker version of the Metal Alloy.  As for the Light Reflector, it has a rough texture on the swatch and is somewhat glittery when the light angle changes.

There's also a Phosphorescent Glow-in-the-Dark spray can in the catalog, which I probably missed while checking for colors in Bosny's website.  I'll see if I can procure that and test it as well. 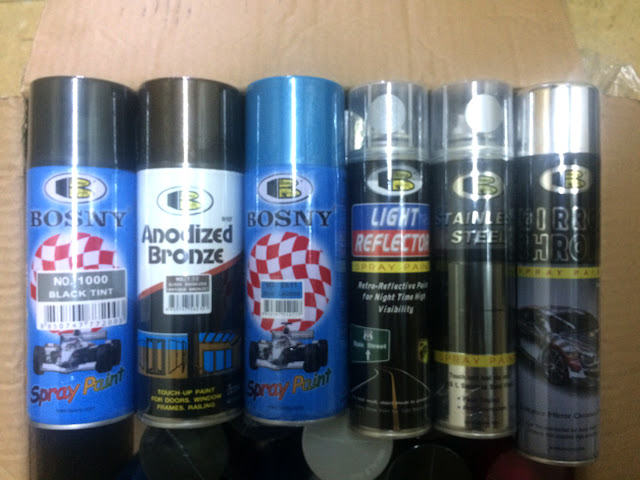 Of course, I would be amiss if I didn't get these.  My all-time favorite buffer and candytone undercoat, the Bosny Premium Metal Alloy.  I also use the Metal Alloy as my "Silver" in most of my paint jobs, mainly because its faint yellowish tone looks a lot nicer than the bluish-gray tone Aluminum, Silver and Metallic Silver.  I got 12 cans of these babies.  A while back, I bought 6-pack box of Metal Alloy, 5 of which were duds, where I ended up with lumpy splotches of goo instead.  I guess this more than makes up for that. 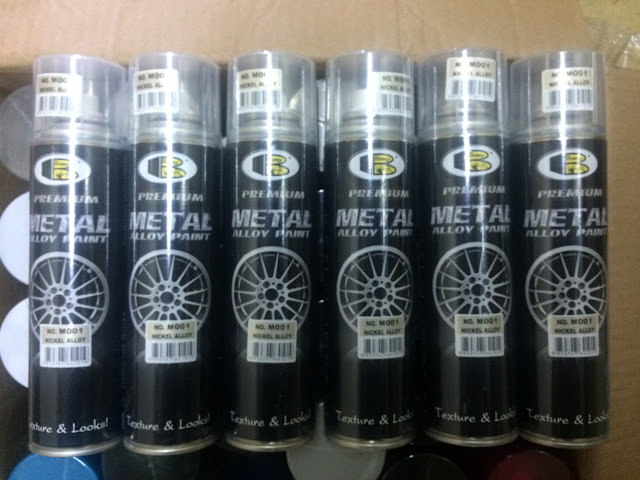 That's it for now.  This post also marks a 3-year blog post absence since everyone seems to prefer quickie Facebook posts more than detailed blogs.
at August 22, 2017

And These Came in the Mail

Rather, I had these sent to my school since I was on an off-site training.  Bosny Philippines has once again graciously sent me free... 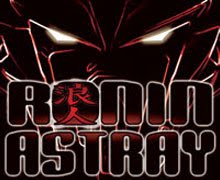